A complete and thorough guide for consuming CBD oil for dementia and alzheimer’s disease including the research studies, risks and methods of consumption.

In this article we aim to provide a comprehensive guide to CBD oil and its uses for dementia and Alzheimer’s, highlighting the differences between the two conditions as well as any risks and benefits associated with consuming CBD oil.

We will then investigate the current research into using CBD oil for Alzheimer’s disease and CBD oil for dementia and format it into an easy to digest article for those who wish to understand more on the subject.

What Is Dementia & Alzheimer's?

Dementia and Alzheimer’s are often used interchangeably by most people, but they aren’t the same. Dementia is a term which describes the symptoms where a person’s memory, ability to communicate and ability to perform daily tasks diminish.

Alzheimer’s is a disease which causes the symptoms of dementia, but it isn’t the only one. So, although they both are associated with each other – it is important for medical professionals to distinguish between them for treatment purposes.

What Are the Differences Between Them?

Dementia is the blanket term for a range of conditions that negatively affect the brain. The two are commonly associated because Alzheimer’s is the most common cause of dementia making up 70% of cases.

However, other conditions cause dementia such as Parkinson’s disease and Vascular dementia. The treatment of dementia depends entirely on the condition that causes it.

Unfortunately, there are no cures for dementia caused by Alzheimer’s, but certain drugs have been shown to slow down the worsening of symptoms by preventing the progression of the disease. Other types of dementia are curable but this only happens in fewer than 20% of cases.

What Can Cause Dementia & Alzheimer's?

The main reason a person develops Alzheimer’s disease is due to inherited genetics, although it is believed a few cases could be down to environmental reasons.

It is caused by defects during the formation of proteins which causes small fragments called beta-amyloid to be leftover. These join together to form a ‘pleated-sheet’ and as this gets bigger, it begins to take over regions of the brain and diminishes brain function.

The symptoms of Alzheimer’s and dementia get progressively worse over time, and include:

Starts with forgetting conversations and repeating statements and misplacing possessions. As the disease progresses, people may get lost in familiar places, including their own home and eventually forget the names of family members and everyday objects.

Difficulty making decisions, planning tasks and struggling with numbers. This affects their ability to plan and cook meals, drink water, pay bills and as it worsens it eventually leads to an inability to dress and bathe.

As areas of the brain begin to be taken over by Alzheimer’s, the personality of the person begins to change. From symptoms of depression and social withdrawal brought on by the inability to trust and recognise others, to eventually full delusions and hallucinations. CBD oil for depression is also a new trend that, while needs more research, could be extremely beneficial to a lot of people around the world.

Have studies been completed on CBD oil for dementia or Alzheimer’s?

The research into using CBD oil for dementia or CBD oil for Alzheimer’s disease is currently very limited, although the results of the minimal studies conducted have been positive.

A 1998 study showed that CBD and THC are neuroprotective antioxidants in rats suggesting they could be used to prevent the onset of neurodegenerative diseases such as dementia and Alzheimer’s.

A 2016 pilot study showed that the use of cannabis oil is a safe and promising treatment option for Alzheimer’s disease in humans with the potential to reduce delusion, agitation/aggression, irritability, apathy, sleep and caregiver distress.

A 2017 review study shows that CBD and possibly a CBD-THC combination could show promise in preventing the onset of dementia caused by Alzheimer’s. Unfortunately, it concluded that it is unlikely that CBD will reverse the symptoms in patients already suffering strong symptoms of Alzheimer’s disease.

A 2018 review study compiled research from animal and human studies which confirms the neuroprotective, anti-inflammatory and immunomodulatory benefits of CBD and THC for a variety of neurological diseases which include dementia and Alzheimer’s disease.

All of this forms the basis for future and more comprehensive research studies into the use of CBD for Alzheimer’s disease.

Are there risks to taking CBD Oil?

The World Health Organisation (WHO) has compiled a report on CBD in which they state it has no potential for abuse, overdose, toxicity or major side effects. A few minor side effects have however been noted for CBD in a small number of patients, such as: –

It is also stated that CBD can help nausea, reduce appetite and help with sleep so it appears to be very dependent on the person consuming it and for what purpose.

From preliminary testing, it appears that CBD is safe for further studies with dementia patients. Clinical studies have shown that CBD is no less safe for dementia and Alzheimer’s patients than normal patients with only the potential for side-effects listed above in a small percentage of patients.

Even if a patient was to exhibit any of the minor side-effects listed above for CBD, advice given from current studies on CBD would be that it is still safe to continue the trial. 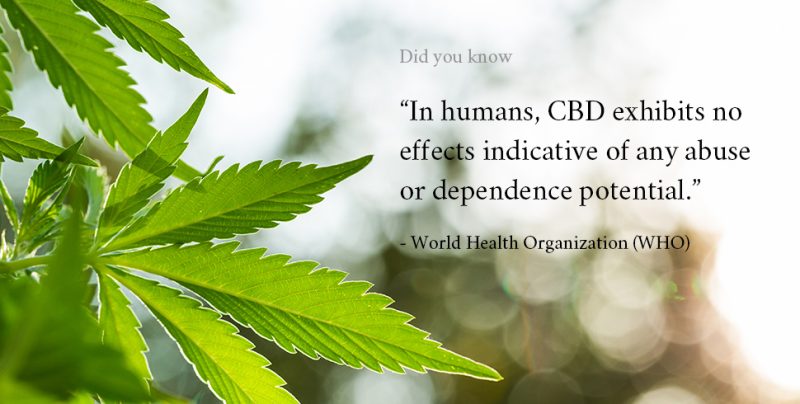 CBDs potential health benefits for patients with dementia or Alzheimer’s

Research into using CBD to prevent the onset of dementia and Alzheimer’s disease has theorised it may help because of three potential properties: –

However, it is worth noting that at this point, the correlation between how CBD may potentially reduce the onset of dementia and Alzheimer’s is only a proposition and the purpose of further study would be to try and confirm a method of action if indeed it is proven that CBD helps in humans at all.

How To Use CBD Oil For Dementia & Alzheimer's

CBD has become synonymous with the phrase ‘CBD oil’. However, it doesn’t necessarily have to be administered as an oil to a patient with dementia or Alzheimers.

If a patient was to consume CBD for dementia or Alzheimer’s, the likely methods of administering it would be:

CBD that has been extracted into an oil to be consumed orally. Capsules are an easy way to take CBD as they are already pre-dosed so there will be no mix-up in how much you are taking.

CBD that has been extracted into an oil or alcohol solution to be consumed sublingually (under the tongue). Some people though find the taste of the oil very off-putting.

CBD that has been extracted and placed into food to be eaten. Best value CBD edibles are one of the most popular ways to consume CBD as it's simple, can taste nice compared to the tinctures and you know how much CBD you are taking.

CBD which is placed into patches similar to a nicotine patch to be absorbed through the skin. Again, these CBD patches come pre-dosed and are very simple to use so they are perfect for beginners.

What Are the Results? (Of Dementia patients taking CBD Oil)

Anecdotally, there are lots of stories which say that CBD is effective in the treatment of dementia. These stories generally come from caregivers treating someone with the condition. The stories state that CBD may help to keep dementia patients calm.

Due to symptoms such as confusion, anxiety and depression, patients with dementia and Alzheimer’s are typically hard to treat. The calming effects of CBD have been cited as being useful in combating these symptoms and giving the caregiver some relief.

What is the future of CBD Treating Dementia & Alzheimer's

Many scientists believe that CBD will have an effect on reducing the onset of dementia and Alzheimer’s. But now we are at the stage where much more clinical research is needed before we begin to see CBD prescribed for the treatment of Alzheimer’s disease in the UK.

Most scientists believe it is the anti-inflammatory properties of CBD which aid its usefulness in preventing the onset of dementia and Alzheimer’s, much in the same way as common NSAIDs (non-steroidal anti-inflammatory drugs) such as ibuprofen and naproxen.

Because NSAIDs are quite harmful to the digestive system and the kidneys with long-term use, if CBD is shown to have a similar effect and it does so with fewer side-effects, it could replace the use of standard NSAIDs.

What actually Is CBD?

CBD is a chemical constituent extracted from the cannabis plant that has recently entered the spotlight for its medical potential. Currently prescribed in the UK, CBD oil is being used to treat epilepsy and multiple sclerosis (MS), CBD is also being researched for its ability to help the symptoms of conditions such as dementia and Alzheimer’s.

CBD is non-intoxicating, meaning that it won’t cause the user to feel ‘high’ or ‘stoned’ from consuming it, unlike the main psychoactive constituent of cannabis, THC.

We are at a stage in which the preliminary research for the use of CBD in the treatment for the worsening of dementia and Alzheimer’s has been positive. However, the trials have been small and most have only been conducted on rodents. Therefore, the need for more studies is necessary and the process potentially long.

Anybody with a family member who is suffering from dementia or Alzheimer’s in the UK should speak to their GP before administering any medication themselves.

CBD vs THC - know the difference