Internet entrepreneur and celebrity gambler, Dan Bilzerian landed in London ahead of the Europe CBD Expo this week, to launch his California-based company’s ‘Ignite CBD’ on the UK and European market.

The whole area of advertising CBD dominated key speakers agenda at the event as the CBD oil product kicked off its UK launch at the Mandrake hotel, showcasing a range of coconut oil tinctures infused with 1200mg of CBD in flavours like blood orange, lavender and cucumber-lemon-mint blends.

The brand also carries a range of both rechargeable and disposable CBD vaporizers.

As the Gold Sponsors of the Europe CBD Expo, Ignite chairman Jim McCormick opened proceedings as keynote speaker on Day 1 of the Expo, which focused on business-to-business development. McCormick discussed the “wide open space” that is the UK and European CBD industry, which he believes Ignite is “well positioned” to take advantage of – largely thanks to Bilzerian’s already infamous celebrity on social media.

He also made reference to the importance of Bilzerian’s ready-made brand in a “dark matter environment” such as the CBD industry, which is grappling with restrictions around advertising as regulations struggle to keep up with public demand.

The trouble with celebrity advertising

Unlike many other celebrity-owned cannabis and CBD brands, Bilzerian has purposely kept his name away from official Ignite products and merchandise.

While this might seem surprising coming from an individual who has built an entire career out of being as ostentatious as possible, he has stated that he wants the brand to be able to stand on its own without his name attached.

In comparison to other celebrity-owned cannabis companies – like Leafs by Snoop, and Willie Nelson’s brand Willie’s Reserve – this choice also gives Ignite the advantage when navigating restrictions around the promotion of cannabis and CBD in Canada, since recreational cannabis was legalized in October 2018.

Canadian cannabis regulation prohibits any promotion of cannabis that explicitly uses an animal or individual, both real and fictional. As the brand moves its CBD line into the UK and European market, this choice may also prove beneficial in the future as countries legislate for the growing popularity of CBD.

In California, where Ignite is based, there are also restrictions on how cannabis and CBD products can be promoted. Social media platforms like Twitter and Facebook prohibit advertising around the sale of legal recreational drugs, as well as tobacco products and prescription drugs. Cannabis can only be advertised in radio, print, cable and digital ads where at least 71.6% of the audience is estimated to be over the age of 21.

With such restrictions around promoting cannabis and CBD online, Ignite (and many other brands) have relied on a more old-school marketing approach to sidestep these rules – billboards.

While billboards come with their own set of restrictions (such as being prohibited from interstate highways, and not being allowed within 1,000 feet of day care centres, schools and youth centres) they have provided an outlet for an industry that is largely ostracized on social media.

RELATED ARTICLE: Who are the top 10 CBD companies? CONTINUE READING

While brands like Eaze and Humbleroot have leaned away from explicitly “adult” content towards block colour schemes and text-focused advertising, Ignite billboards are instantly recognizable. “Roadsides around California have become adorned with slim, young and scantily clad models advertising the Ignite brand, along with captions like “Nice Grass” and “Best Buds”.”

While Ignite claims their one goal is “to change what you, and society, think about cannabis”,
their advertising approach has faced criticism for promoting a “low brow” view of the cannabis industry in the U.S. 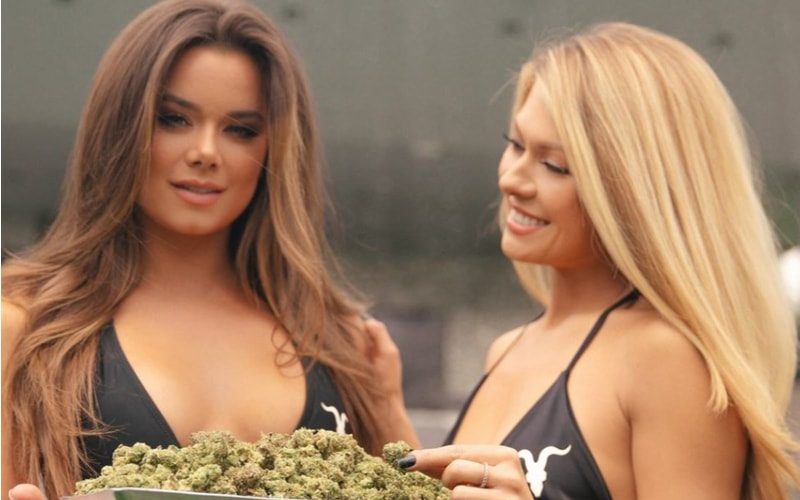 Women working in the cannabis sector have also condemned Ignite billboards for perpetuating the same “stoner-bro” mentality that alienates women in the industry and hinders their professional development.

While both McCormick and Bilzerian have pushed back against the idea that Ignite is wrapped up in Bilzerian’s persona, much of the advertising seems to reflect Bilzerian’s own audience – with millennial men aged 18-34 accounting for 85% of his social media followers.

A report from Vangst released in March this year surveyed 166 cannabis companies across the United States, and found that while women counted for 38.5% of employees, only 17.6% of these women occupy ‘Director’ or executive positions.

RELATED ARTICLE: CBD Marketing - How Can We Help? CONTINUE READING

On top of that, women working in the cannabis industry are often victims of sexual harassment.

Despite this, the backlash against Ignite hasn’t stopped high-profile female celebrities like Cardi B and Nikita Dragon endorsing the brand. In his keynote speech, McCormick dismissed this criticism from other brands as mere “jealousy”, and referenced brands like Marlboro who maintained popularity among a female audience while using a more male-centric advertising strategy. In conversation with the Extract, Ignite’s Director of Public Relations Caitlin Lockridge indicated Ignite’s marketing for the UK and Europe would diverge from the “sex sells” model.

“We’ll have a different approach here, obviously things like that [sic], girls in bikinis works in California very nicely, it’s still gonna have that Ignite look and feel to it, you’re gonna know it’s us, but it will be in a different direction”.

While the brand is yet to launch any official UK marketing campaigns, the Ignite CBD Instagram has recruited young female influencers to promote the brand in Britain ahead of the UK launch.

Check out our IG Story to take a tour of London with one of the city’s coolest residents, @blueberry.monkey.🇬🇧✌️#IgniteCBD is launching in the UK mid-July.

At the Europe CBD Expo this weekend in London’s ExCel, gender disparity in the industry is likely to become a topic for discussion at the Women in Cannabis panel event on Saturday, which will bring together leading female professionals across all fields of the industry.

Directly afterwards, Bilzerian himself will be handing out prizes of Ignite CBD products to Expo attendees in the closing ceremony.

Bilzerian and McCormick have their sights set on the global market – and as the company expands in the UK and Europe, it will be interesting to watch how this “sex sells” approach will factor in with UK and European restrictions around CBD and cannabis advertising.

Abercrombie & Fitch signs up to CBD

Hemp - the new cash crop for the 21st century