Most of us enjoy a drink to celebrate or commiserate with friends, family, and co-workers. More often than not, that glass of wine or ice-cold beer in the evening is there to take the edge off a long and stressful day.

This daily dependence on alcohol is exacerbated by the peer to peer acceptance, self-promotion, and alcohol-friendly media, all of which is silently plunging our nation into a crisis that is killing one person every hour. The latest studies in CBD used with alcohol is showing that CBD can reduce alcohol levels.

In the UK alone more than 1.6m people have some level of alcohol dependence, while 10.8m are drinking at a level that poses “severe public health risks” according to ‘Public Health England’.

Preconceived notions that alcohol addiction only affects those living on the streets is being diluted by ‘Alcoholics Anonymous UK’ who say that the majority of their members have a job, a mortgage, and outwardly appear to have a happy normal life.

A bulging waistline or severe migraine can instigate lifestyle changes, but all too often we fall back into old, familiar ways.

As we’ve mentioned already, throughout the United Kingdom there is a relaxed attitude to alcohol use. This can lead to many people not even being aware that they are on a slippery road towards abuse. Though this attitude is not limited to or unique to the UK, our own problems can’t be ignored.

Of course, many people enjoy having a drink on a night out or, these days, at home on Zoom with friends. You might even joke that a friend of yours is an ‘alcoholic’ or an ‘alcho’. While, we hope, that most of the time this is lighthearted, it can mask a very real problem.

But we want to be clear: alcoholism is an extreme form of substance abuse that shouldn’t be taken lightly. According to Alcohol Rehab Guide, an alcohol use disorder can be divided into three distinct categories – mild, moderate, and severe.

A person who suffers from alcohol dependency may feel that they cannot function in ordinary daily life without the use of alcohol. Naturally, this often leads to problems physically, as well as mentally, professionally, financially, with regard to personal relationships and other personal areas.

In time an unchecked alcohol addiction can lead to serious side effects that can result in untimely deaths.

There are a number of symptoms and warning signs you should be aware of if you suspect you or a loved one is suffering from alcohol dependence.

These include but are not limited to the following:

Even if the person dealing with the drinking problem does not currently see it as an issue this should not be ignored.

Cannabidiol (CBD) the non-psychoactive constituent from the hemp plant has been explored for a multitude of health benefits, and researchers now believe it could help reduce our alcohol intake too.

Published in May of this year, Researchers from the ‘Miguel Hernandez Institute’ showed that CBD administered into mice resulted in a significant reduction in alcohol intake compared to placebo. 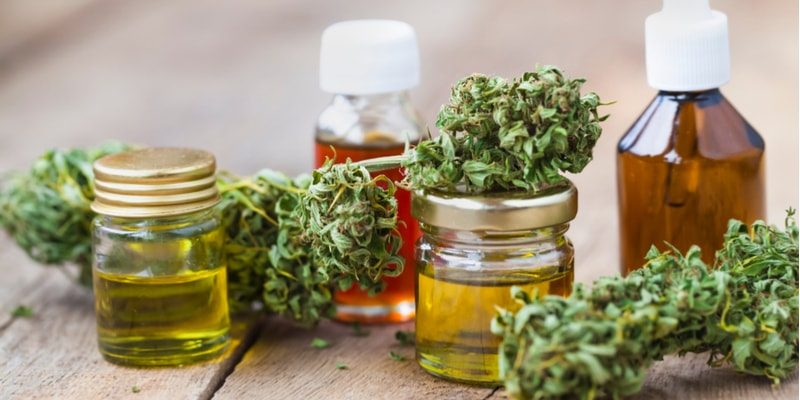 CBD was shown to significantly reduce ‘Tyrosine Hydroxylase’, an enzyme involved in the synthesis of the neurotransmitter dopamine.

Further research into alcohol and cocaine addiction in rats showed CBD administration once a day for 7 days prevented relapse for at least 5 months even though CBD cleared from the brain and body after 3 days.

Two studies in mice from 2014 and 2017 also show CBD protecting the liver from binge-induced steatosis as well as reducing steatosis in the liver.

There is also a growing body of evidence that indicates CBD may help with weight loss for diabetes. It's thought to work by helping to reduce daily food intake and boosting your metabolism. There's more research to be done, but it's looking promising at the moment.

Another bright spark for the future of alcoholism-treatment is cannabis. Cannabis has been much maligned in the previous decades as a substance to be scared of, but new research has shown that cannabis has positive health benefits.

Should you use cannabis for alcohol withdrawal?

It might seem odd to replace one mind-altering substance with another. However, there is growing evidence to suggest this could be a viable alternative.

10% of patients reported a year or more of alcohol abstinence and attributed their success to cannabis, while 21% reported a return to unsafe drinking when stopping cannabis use.”

While that might sound overwhelmingly positive the authors of the study were quick to point out their own reticence about believing that it was a cure-all.

From the same study, they say, “Although the results from the above studies are provocative, they rely on retrospective designs and often focus on medical marijuana users without alcohol use disorders (AUD). Furthermore, medical marijuana patients may be dealing with illnesses that affect their drinking regardless of cannabis use.”

Is there a risk of addiction to cannabis?

For many years, it was thought that cannabis or marijuana could be addictive. Some said that that was impossible while others believed it to be true. It turns out it is in fact possible to become addicted or dependent on cannabis. However, the likelihood is somewhat lower than other commonly known addictive-substances.

Only around 10% of heavy cannabis users are even susceptible to becoming addicted to cannabis. For long term users, there is a risk that you can become increasingly tolerant of cannabis requiring greater and greater amounts to feel similar effects.

Also Read:  CBD Oil for Cancer: What are the benefits & what does research say?

While this could largely come down to a matter of personal preference we can offer some insight into the best methods of taking medical cannabis.

Generally speaking, inhaling any kind of smoke can be damaging to your lungs. People who smoke cannabis are more likely to develop bronchitis. This is a condition that inflames the lining of your bronchial tubes located in the lungs. Signs of bronchitis include regular coughing up of thick, discoloured mucus.

Our recommendation for taking medical cannabis would be cannabis creams, oils, gummies or tinctures.

Since 2018 it has been legal for the NHS to prescribe cannabis for certain conditions. However, those prescriptions are few and far between.

If you’re one of the lucky few to get a prescription from the NHS you can expect to be prescribed cannabis oil. Often these come in tinctures which can be dropped beneath the tongue (sublingually is the fancy term) or added to food and drink if you’re not keen on the taste. They’re discreet and incredibly effective.

Cannabis topicals can also be applied to the skin where they are directly absorbed into the bloodstream. It’s easy to do and slow-releasing so you don’t get all the effects at once. Gummies are another popular method of cannabis ingestion. These can be found in flavoured chewy sweets that gently release cannabis into the body. These are incredibly popular in the United States and Canada and can be found in most dispensaries.

Alcohol Use Disorder (AUD) costs the UK over £21 billion every year in alcohol-related crimes, lost workplace productivity and NHS costs. Every weekend up to 70% of people admitted to hospitals is as a result of alcohol-related injuries.

We know that using cannabis for alcohol withdrawal will not be everyone’s cup of tea. It might even sound a bit too out there even for people who enjoy cannabis. After all, cannabis intoxicates as much as alcohol in some ways.

However, the evidence is growing and we hope that someday the world more readily embraces the possibilities presented by cannabis.

Can CBD edibles be used for micro-dosing?